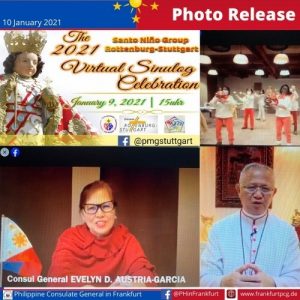 9 January 2021 – Consul General Evelyn D. Austria-Garcia today joined the Filipino-German Community of the Diocese of Rottenburg-Stuttgart who highlighted the 500th Year Anniversary of the Arrival of the Image of Sto. Nino in the Philippines during their virtual celebration of the 27th Sto. Niño de Cebu Sinulog Festival, which was streamed live via the Facebook page of the Diocese of Rottenburg-Stuttgart (@pmgstuttgart).

In her remarks, Consul General Austria-Garcia commended the devotion among the Filipino Catholic Community in Germany to the Sto. Niño and how it has taken root within the Filipino culture and how the Sinulog Festival has become an expression of our Catholic faith. “This year’s festivity is particularly special as the country celebrates the 500th anniversary of the arrival of the image of the Señor Santo Niño in the Philippines. We remember the story of how Ferdinand Magellan and his crew were able to indoctrinate the natives in 1521, some 500 years ago and underscored that though some may see the image of the Sto. Nino as one of colonialism, it can also be argued that Filipino natives at that time were baptized of their own free will,” the Consul General said.

The Sinulog Festival also featured musical numbers from members of the Manila-based Imusicapella Chamber Choir and Sinulog song and dance performances by members of the Filipino-German Community in Stuttgart. Due to the expanded COVID-19 restrictions mandated by German authorities until 31 January 2021, this year’s celebration of the Holy Eucharist in honor of the Sto. Nino was cancelled. END