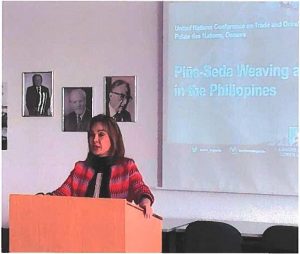 Deputy Speaker Loren Legarda delivered an engaging lecture on Philippine weaving  tradition  entitled, Piňa-Seda  Weaving and Embroidery in  the Philippines,  before students and professors of Ruhr University on 15 October 2019 in Bochum, Germany.

She  underscored   that “the piňa–seda weaving and embroidery are only a few of hundreds of stories of the  Philippine weavers.”  She expressed  hope that through the combined  efforts of her office and the Consulate, the Philippines can further enrich the Philippine weaving tradition and make the  piňa–seda  textile a prized item in Germany and the rest of Europe.

The  Deputy Speaker  explained  the process  of piňa-seda weaving  and embroidery  for piňa-seda, and expounded on the importance of promoting traditional textiles as they bring together industries, communities,  and people.

“The strengthening of the local tropical fabrics industry is attuned to our advocacy of promoting sustainable  development  and preserving  our rich  heritage. It will also provide jobs especially for  those  in  the  countryside.   Furthermore,  it  unlocks  the  creativity  of  Filipinos,  which  is overflowing,” the Deputy Speaker said.

The event is the first time that a high-level elected Philippine government official delivered such lecture at the German University.  The activity forms part of the Consulate’s efforts to promote Philippine  culture under its jurisdiction.  It  is also an offshoot  of the Hibla ng Lahing Filipino Travelling Exhibition,  an exhibition  featuring  piňa-seda woven and embroidered  fabrics from Aklan weavers and Laguna embroiderers,  that was presented by the Consulate  in November last year.

The lecture signals the start of a series of lectures, conference, seminars, and other activities concerning  the Philippines at Ruhr University Bochum (RUB) in line with the agreement  that was signed by the Consulate and RUB to promote Philippine studies earlier in the day. END