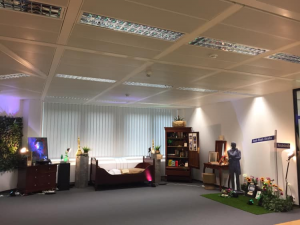 The rare Rizaliana items currently on exhibit at the Consulate General’s Exhibition area include a mirror and table, cabinet, cupboard, dresser, and bed. Interestingly, it is believed that Rizal finished his novel “Noli Me Tangere“ using the table that is displayed at the Consulate.

19 June 2019 – In commemoration of the 158th birth anniversary of Philippine national hero Dr. Jose Rizal on 19 June 2019, the Philippine Consulate General in Frankfurt invites the public to visit the exhibition of rare Rizaliana furniture items at the Consulate’s exhibition area.

The Rizaliana exhibition was officially opened for public viewing on 21 May 2019 after a lecture on Rizal by well-known German Rizalista, Dr. Fritz Hack Ullmer, during the Consulate General’s National Heritage Month celebration in May. The exhibit showcases selected furniture items that were used by Rizal during his stay in the vicarage of his German host, Pastor Karl Ullmer in the spring of 1886.

The exhibit items include a mirror made of walnut wood, while the cabinet, the cupboard, the dresser, and the bed, are all made from mahogany. Interestingly, it is believed that Rizal finished his novel “Noli Me Tangere“ on the said table. They were “gifted’ to the Consulate General by Dr. Ullmer, the great grandson of Pastor Ullmer, so that these rare Rizaliana items may be shown to the public as pieces of shared history between the Philippines and Germany.

The Rizaliana exhibit is open to the public from Monday to Friday, during office hours at the Consulate General’s Exhibit Area, 1st Floor Westend Carree Gruenerburgweg 16-18 Frankfurt am Main, Germany.