29 May 2020 – Following the success of her presentation at the Ruhr University of Bochum, Germany last year, Filipino Professor Stephanie Marie Coo expounded anew on 19th century Philippine clothing as she delivered an online lecture via the platform Zoom on 27 May 2020.

The online lecture entitled, “Researching about Philippine Clothing in European Archives,” was organized by the University of Cologne in Germany and Universidad de Granada in Spain, where the professor is currently a Marie Curie postdoctoral fellow.

Consul General Evelyn D. Austria-Garcia congratulated Professor Coo for her insightful presentation and expressed hoped that through such intellectual discussions about our clothing and social history, various facets of Philippine culture will continue to pique the interest of scholars and researchers in Germany and the rest of Europe.  Vice Consul Fatima Mejilla C. Mueller attended the online lecture, as representative of the Philippine Consulate General in Frankfurt.

During her lecture, Professor Coo provided a colorful and visual overview of the clothing of men and women of varying ages, political positions and occupations in nineteenth century Spanish Philippines. She also sought to answer what clothes reveal about the social, gender and political hierarchies of that time. The lecture was aimed at explaining the use of clothes as tools for discussing social history and to present Philippine iconographic, textual and material evidences available in Spain, France, Germany and the Philippines.

Professor Coo’s Zoom lecture was attended by some 120 participants from 15 different countries, comprised of Philippine diplomats based in Europe, museum experts, designers, faculty and students from the School of Oriental and African Studies in London, University of British Columbia in Canada, National Institute for Oriental Languages and Cultures in Paris, Université libre de Bruxelles in Belgium, Universiteit van Amsterdam in the Netherlands, Universidad de Cantabria in Spain, University of Hong Kong, Seton Hall University in the United States and several Philippine universities in Manila, Cebu, Dumaguete.

The online event, Professor Coo’s second engagement with a German university, was made possible upon the invitation of the University of Cologne.  A similar lecture on Philippine clothing and nationalism was delivered at the Ruhr University in Bochum last December.

The initiative was undertaken in line with the Consulate’s goal of supporting Filipino scholars, historians, and researchers in Germany and was made possible through the support of then Senator Loren Legarda.  The agreement with Professor Coo to undertake a  research project entitled, “Rediscovering Philippine Material Culture in German Archives,” was forged with the Consulate in December last year. It is hoped that the ongoing research project would further promote cultural ties between the Philippines and Germany through such scholarly exchange of knowledge and methods.  (END) 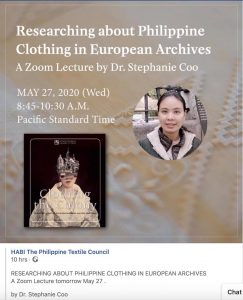 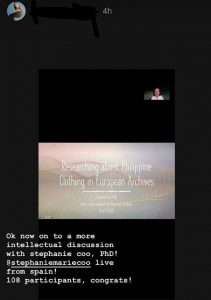 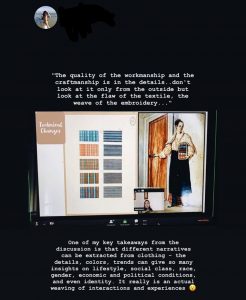 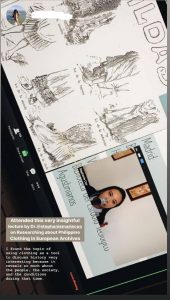 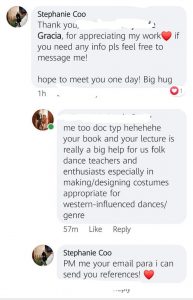