Little known aspects of Dr. Jose Rizal’s first trip to Europe are revealed in the new documentary, Finding Rizal in a Time of Barriers. The project began when former senator Loren Legarda toured the small German town of Wilhelmsfeld in 2019 together with Dr. Fritz Hack Ullmer. Dr Ullmer is the great grandson of Pastor Karl Ullmer who hosted Rizal for three months in Wilhelmsfeld in 1886. The memories of that stay, as well as Rizal’s correspondence and memorabilia have since become part of the Ullmer family’s legacy through three generations.

In the middle of production plans, the project came to a halt due to the global pandemic that changed the world in 2020. However, with the perseverance of the Philippine Embassy in Berlin led by Ambassador Theresa de Vega, the Department of Foreign Affairs in Manila and the Office of Deputy Speaker Legarda, the documentary took shape and was finished in time for the celebration of our national hero’s 160th birthday this June 2021.

Amidst the challenging circumstances, Legarda, who is the visionary behind the project, was inspired and uplifted by Rizal’s life. “Rizal lived in a time of barriers created by skin color, religion, political ideologies, and colonialism. Yet he broke through these barriers to affirm his humanity and his genius. His trip to Germany was marked by the completion and publication of the Noli Me Tángere. It was also on that first trip that he wrote the immortal poem, A Las Flores De Heidelberg. He was studying ophthalmology and he was also being introduced to the academic circles of Berlin as a culture bearer for scientists and humanists like Blumentritt and Virchow. His time in Wilhelmsfeld, though short, was marked by the friendship and acceptance of the Ullmer family, who treated him as a friend. It was a challenging time for Rizal,but it was also a joyful and productive one.”

Floy Quintos who gave the creative direction for the project explains, “In a way, the process of completing this documentary was our own way of coming to terms with the barriers that the pandemic had imposed on all of us.”

Historians Ambeth Ocampo and Dr. Mila Guerrero annotated aspects of this significant journey of Rizal through Germany, giving context and meaning to the facts often regarded as mere trivia. But the documentary also becomes a more personal one through the voice of Dr. Fritz Hack Ullmer, who tenderly recounts the memories passed on to him by his grandfather, Friedrich, who was only fourteen at the time of Rizal’s stay in their home.

“Hopefully,” Legarda adds, “this documentary will open our own eyes to the admiration that other countries, like Germany, have for our national hero. There are markers everywhere that trace Rizal’s journey, streets named after him, plazas in Paris and Madrid and Germany which bear his name. As Filipinos, we should have that same appreciation for Rizal’s genius and contributions to world culture.”

“This story had to come home. It is so resonant for all of us whose lives have been changed by the pandemic. We draw inspiration from Rizal, a Filipino travelling through Europe in the late 19th century who overcame many obstacles. In this documentary, that first trip of Rizal through Europe shows that while these obstacles were not easy to overcome, he gained knowledge of his own humanity and his limitless possibilities. He grew—as an intellectual, a scientist and doctor, as a human being in the company of other human beings who valued his personhood and intellect more than they did his race or skin color. Hopefully, through Rizal’s story, we find the means to overcome the barriers that we face today.”

Finding Rizal in a Time of Barriers was conceptualized and envisioned by 3-term Senator, Deputy Speaker, and Antique Congresswoman Loren Legarda in collaboration with the Department of Foreign Affairs-Philippine Embassy in Berlin and produced by Light Vision Films. The documentary will air on the ABS-CBN News Channel on June 19, 2021, at 7:00 pm with a simultaneous broadcast on the ABS-CBN News YouTube channel. It will have a replay on (date) at (time). 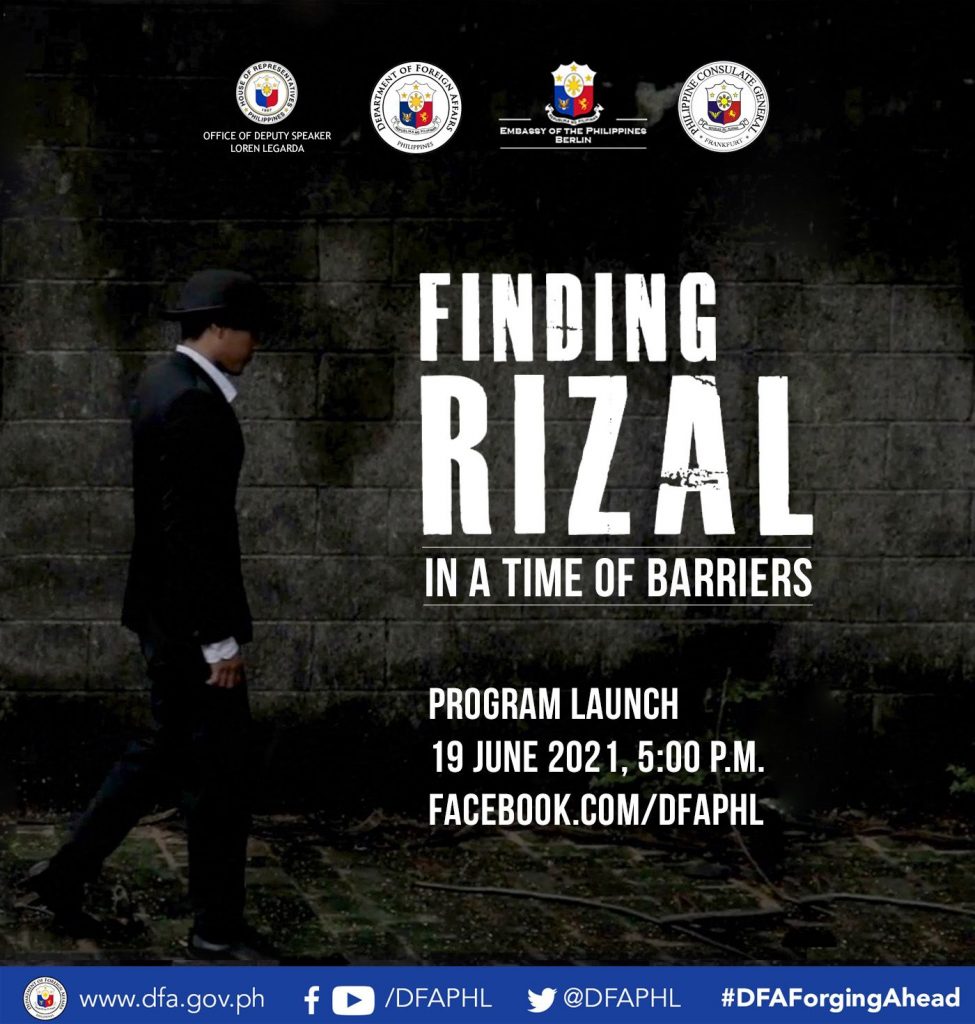