PRESS RELEASE
23 April 2021- In celebration of Filipino Food Month which coincides with the ongoing 2021 Quincentennial Commemorations in the Philippines, the Philippine Consulate General in Frankfurt co-hosted today with the Philippine Honorary Consulate (PHC) in Stuttgart an online program entitled, “Tao at Serbisyo ang Galing ng Filipino,” which was streamed live via Facebook. The activity, with Vice Consul Fatima Mueller and PHC Stuttgart’s Rhodaliza Steegmaier as co-hosts, discussed the origins of Filipino food, with ‘Lugao’ showcased as one of the earliest documented food of our Filipino ancestors.
A video entitled, “Lugao: Cooking Our Filipino Ancestors’ Food in Germany” which featured Filipino-German Chef Maite Dittke, was shown during the event. Chef Dittke described the different varieties of ‘Lugao,’ also known as ‘pospas,’ ‘arrozcaldo,’ ‘congee/jook,’ or ‘goto.’ She also discussed in detail the historical development of the Filipino dish and its significance in the country’s culture.
Vice Consul Mueller further highlighted the fact that Filipino culinary heritage had begun taking shape even before colonization. She noted that some of the earliest account of Philippine food can be traced in the written accounts of Antonio Pigafetta, the Italian chronicler of the Magellan expedition. She encouraged viewers to discover more of the Philippines’ culinary heritage, as ‘Filipino food defines the very structure of Filipino culture and gives more value to its cuisine.’ The Consulate also designated 23 April as “Lugawan sa Konsulado” where it distributed ‘lugao’ with side dishes to its consular applicants as well as its personnel.
The second part of the program involved the presentation by Vice Consul Mueller of the Consulate’s activities for the National Quincentennial Commemoration. Ms. Steegmaier interviewed Filipino fashion designer Lionell Christian Lanuzo, who was commissioned by the Consulate to undertake a virtual fashion exhibit entitled, “Golden Treasures: Culture, Art and Traditions of Our Filipino Ancestors,” for its National Heritage Month celebration in May. END 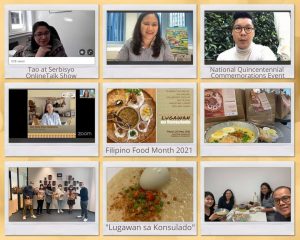