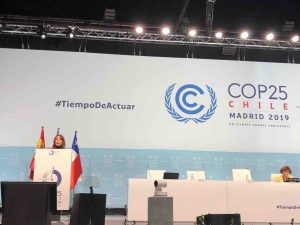 MADRID, Spain – Deputy Speaker and Lone District of Antique Representative Loren Legarda delivered the Philippine Statement at the High-Level Segment of the 25th Session of the Conference of Parties (COP25) to the United Nations Framework Convention on Climate Change (UNFCCC) in Madrid, Spain, where she serves as Head of the Philippine Delegation.

Legarda urged developed countries to fulfill their commitments to the Paris Agreement by leading deep and drastic cuts in carbon emissions and providing finance and investments for innovative adaptation solutions in local communities.

“The latest science tells us that our options to survive and thrive are swiftly diminishing. So in this COP, let us finish the work at hand, “the Paris rulebook.” The urgency of action, unequivocally, is most pronounced today than ever. United climate actions must now happen in an ambitious scale, scope, and speed,” Legarda said.

“The committed climate finance of at least 100 billion dollars by 2020 and every year thereafter for the adaptation and mitigation needs of developing countries must now materialize, beginning with the immediate replenishment of the Green Climate Fund,” Legarda added.

As a parliamentarian for the past two decades, Legarda also mentioned that she has led innovative policy and strategy development for climate action, including the mainstreaming of climate change adaptation and mitigation and disaster risk reduction in the government’s annual national budget.

“The Philippines, constrained as we are in means and capacities, has been doing all it can to make a difference in responding to the global climate emergency. It is in this context that we urge the developed country Parties to rise to the 1.5 climate challenge and uphold climate justice,” Legarda said.

“The time for action has long passed. Now is the time to catch up. Now is the time to translate words into actions. As we end the year to welcome a new one—the year Paris Agreement will be fully enforced—let the era of procrastination, inaction and apathy end as well. Let this end present a new beginning for humanity—a new chance to rise to the climate challenge, this time with a renewed commitment and a stronger resolve,” Legarda concluded.

Legarda thanked the people of Spain for co-hosting COP25 and expressed her confidence to the Chilean Presidency to deliver on the higher ambition and faster action that the 1.5 Paris goal requires of the global community.

Legarda is a UNEP Laureate, UNISDR Global Champion for Resilience, UNFCCC National Adaptation Plan Champion, and Member of the Governing Board of the Green Climate Fund.