By the river Tabunganan is a spring, which is the abode of an evil spirit. Tuwan Putli, accompanied by her cousin Ambaynan, goes there to fish. As they are about to leave, Tuwan Putli sees a river lobster with golden pincers. Ambaynan waits for her, but Tuwan Putli disappears. There is blood in her fish basket. Ambaynan goes home and reports the incident…..

Sounds interesting? This is just the beginning of the epic of Pala’wan people.

“Kudaman” is an epic of Palawan. It is dramatization of nature and social life, a validation of the beliefs, ethics, way of life to Palawan culture. The complete epic is composed of six songs. It takes seven nights to perform the epic. The first night is used to introduce the epic; each of the six songs takes a night to perform. The hero Kudaman appears after the introductory chant. 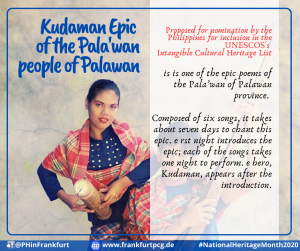