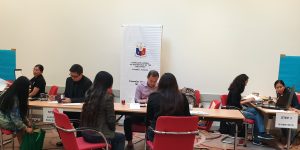 On left photo: Ms. Susan Gonzales checks the documents of an applicant for civil registration while Ms. Lolit Balansag assists applicants for legalization of documents.  Right photo shows an applicant checking the list of requirements at the registration area.

Members of the Filipino-German community in Düsseldorf and nearby areas within the federal state of North-Rhine Westphalia took advantage of the outreach mission held in the city center of Düsseldorf, to avail themselves of consular services.  The Consulate General rendered a total of 130 services during the event, composed of 98 passport applications, 11 civil registry and 21 legalization of documents.

Based on the latest regional statistical reports, there are approximately 4,235 Filipinos living in North-Rhine Westphalia, the second largest number of Filipino residents within Germany, after Bavaria.

The Consulate General in Frankfurt has already conducted two outreach activities since it re-opened in January this year. Consul General Evelyn D. Austria-Garcia said that outreach missions have been scheduled throughout the year to bring consular services closer to the members of the Filipino-German community in the areas under its jurisdiction. (Hesse, North Rhine-Westphalia, Thuringia, Baden-Württemberg, Rhineland-Palatinate, Saarland, and Bavaria).