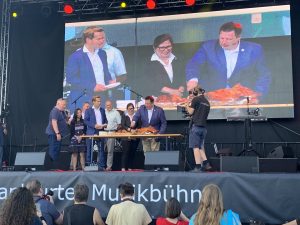 27 August 2019 – Consul General Evelyn Austria-Garcia and Tourism Director Margarita Valdes of PDOT-Frankfurt officially opened the Music Stage of the 2019 Museumsuferfest in Frankfurt with a lechon-cutting ceremony on 23 August 2019.  They were joined in the stage by Dr. Stephan Siegler, President of the Frankfurt City Council, and other local officials. 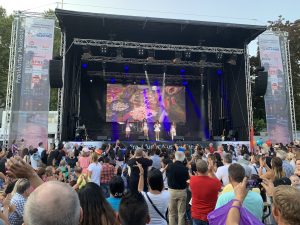 Philippine all-girl group 4th Impact electrified the audience at the Music Stage
of the 2019 Museumsuferfest in Frankfurt last August 23 to 25.

PDOT-Frankfurt again partnered with the Frankfurt Music Stage, one of the biggest stages in the Festival that features artists and bands performing a mix of local and international hits.  Included among the Music Stage’s performers this year were popular German personalities Kerstin Ott, Julian David, Samuel Roesch and Vincent Gross.  The Philippines was represented by the energetic all-girl group 4th Impact, who gained international recognition for their participation in the television show, X-Factor UK.  Their video on YouTube showing the group’s audition has garnered over 140 million views, the most in the TV show’s history.  The quartet electrified Filipinos and Germans alike with their rendition of chart toppers by iconic artists Freddie Mercury, Pink, Michael Jackson, Beyonce and Jessie J, among others.

Completing the visitors’ “Philippine” experience were a photo booth with an idyllic beach setting in the country’s islands as a background and the food truck, Mr. Adobo, which served dishes that included lechon kawali, lumpia and chicken barbecue.

Museumsuferfest is the biggest annual event in Frankfurt, hosting around 2 million visitors from various parts of Germany and neighboring countries.  For 3 days during the summer, Frankfurt’s museum bank along the Main River is converted into one big festival with stages and booths covering an 8-kilometer stretch on both sides of the river.  (END)