As part of its virtual cultural diplomacy initiatives and this year’s National Heritage Month celebration, online videos and infographics were produced by the Philippine Consulate General in Frankfurt to bring into focus several of the country’s intangible cultural heritage (ICH) elements inscribed in the United Nations Educational, Scientific and Cultural Organization’s (UNESCO) Representative List of the Intangible Cultural Heritage of Humanity and other elements.

The said elements are being proposed for nomination by the Philippines for inclusion in the intangible cultural heritage lists.

With this year’s theme, “Mga Kuwentong Pamana” (Stories of Heritage), the online advocacy aims to align Filipinos’ goal of preserving and promoting their local culture and tradition. The Consulate also hopes that the increased online discussion of the country’s intangible cultural heritage could deepen their sense of pride of their cultural heritage.

The initial video, which was published on 06 May 2020 on the Consulate’s website and Facebook page, introduced four elements of the Philippines’ intangible cultural heritage inscribed in UNESCO’s list, namely: the “Buklog, Thanksgiving Ritual System of the Subanen,” which was inscribed in the UNESCO list last year; the “Punnuk, Tugging Rituals and Games of the Ifugao” inscribed in 2015; the “Hudhud Chants of the Ifugao and the “Darangen Epic of the Maranao People of Lake Lanao” which were both inscribed in 2008. The video garnered over 1,200 views and 60 likes on Facebook and stirred much online interests among viewer.

Meanwhile, the infographics of the 15 elements being proposed for inclusion in the UNESCO list are uploaded each day until the end of the month. These include the following: (1) “Kapayvanuvanuwa” Fishing Ritual of the Ivatan of Batanes; (2) “Batek/Batok” Tattoo-making Tradition of the Butbut People of Kalinga; (3) “Ati-atihan festival” of the people of Aklan; (4) Metal and wood craftsmanship of the Maranao of Lanao; (5) “Tepo” mat weaving of the Sama people of Tawi-tawi; (6) Traditional Boatbuilding and Maritime Culture of the peoples of Batanes and Tawi-tawi; (7) Tradition of “Atang” of the Ilocano people; (8) Cosmology of the Mangyans of Mindoro; (9) “Moriones festival” of the people of Marinduque; (10) “Hinilawod Epics” of the people of Panay; (11) “Ulaging Epic” of the Talaandig Manobo of Bukidnon; (12) “Kudaman Epic” of the Pala’wan people of Palawan; (13) “Apung Iru fluvial festival” of the Kapampangan people of Apalit; (14) Kalibo Piña weaving of the Aklanon people of Aklan; and (15) “Digdiga Ni Tupayya courtship dance” of the Kalinga people.

Intangible cultural heritage includes traditions or living expressions inherited from ancestors and passed on to descendants, such as oral traditions, performing arts, social practices, rituals, festive events, knowledge and practices concerning nature and the universe or the knowledge and skills to produce traditional crafts. While most of the elements are fragile, intangible cultural heritage is an important factor in maintaining the Philippine cultural diversity in this digital age.

The month of May is declared National Heritage Month by virtue of Presidential Proclamation No. 439 s. 2003. 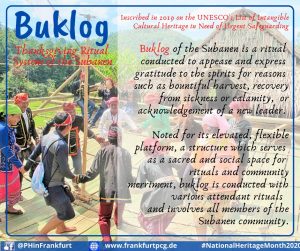 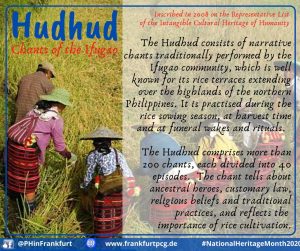 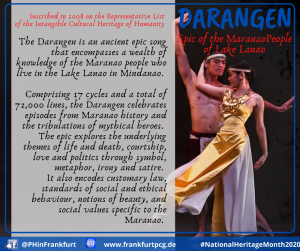 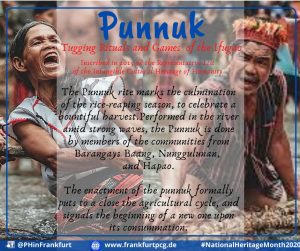