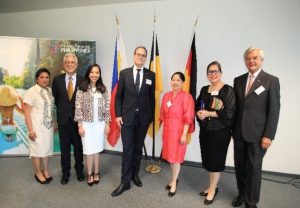 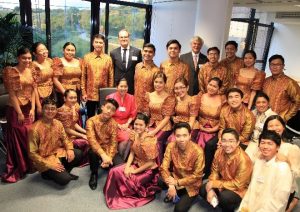 The IMusicapella Choir with Amb. Ma. Theresa Dizon-de Vega and members of the PHC Stuttgart’s Team

The celebration kicked-off at the Philippine Honorary Consulate’s office in Stuttgart with the newly appointed Philippine Ambassador to Germany H. E. Theresa Dizon-De Vega, together with Consul General Evelyn Austria-Garcia of the Philippine Consulate General in Frankfurt as Guest Speakers. Both officials delivered an Independence Day Message at a Reception for members of Baden-Württemberg’s Consular Corps, Stuttgart’s local officials, business community and members of the Filipino community.

During his welcome address, Dr. Neumahr emphasized the Honorary Consulate’s commitment in further developing Philippine-German relations through its support for various economic and tourism undertakings of the Philippine government and by addressing the various needs of the Filipino community in Baden-Württemberg.

Ambassador Dizon-De Vega, for her part, encouraged more dynamic engagement between the Philippines and Germany, particularly in the economic field. She likewise stated, paraphrasing National Hero Dr. Jose P. Rizal, that “Germany will always occupy a special place in the pages of our history by providing a welcoming haven for Dr. Rizal during the creation of many of his most enduring works.”

Consul General Evelyn Austria-Garcia also shared with the audience the early beginnings of the bilateral relations between both Germany and the Philippines and emphasized the Consulate General’s commitment to enhance relations between the two countries.

The multi-awarded church-based Choir Imusicapella impressed the Guests with its rendition of various folk, religious and pop songs shortly before an array of Filipino and German dishes were served while guests expand their business network.

The next day, a second celebration was done at the St. Maria Church where a Special Independence Day Mass presided over by Filipino Chaplain Fr. Jonathan Galope Ramoso was held.  Ambassador Dizon-De Vega delivered a message and joined members of the Filipino community of Stuttgart and nearby cities.  The event was jointly organized by the Honorary Consulate in Stuttgart, the Philippinische Muttersprache Gemeinschaft (PMG), and the Philippine American German Association in Stuttgart Area (PAGASA).

The 3-day celebration capped off with a full-concert of Imusicapella, held at the Event Hall of Birkenfeld city in Pforzheim through the initiative of the Philippinisch-Deutsch Verein Nordschwarzwald e.V., one of the Filipino organizations in the region of Baden-Württemberg, that as it celebrated its 25th year anniversary.

Financial pledges, collections during the mass and proceeds from ticket sales for all concerts held during the 3-day event were donated to Imusicapella as a collective support from the region of Baden-Württemberg for the group’s 3-month European Tour which will conclude in Arezzo, Italy when the group represents the Philippines at the European Grand Prix for Chorale Singing in August 2019.