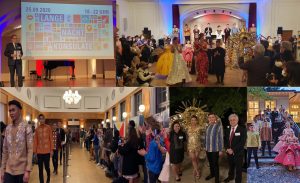 28 September 2020 – The Philippine Consulate General in Frankfurt collaborated with the Philippine Honorary Consulate in Stuttgart to showcase various facets of the country’s culture during in the “Lange Nacht der Konsulate” (Long Night of the Consulates) last 25 September in Baden-Wuerttemberg.
Deputy Consul General Emilio T. Fernandez and Vice Consul and Cultural Officer Fatima Mejilla C. Mueller joined Honorary Consul Dr. Axel Neuhmar during the evening extravaganza to highlight Philippine products, fashion, dance, tourism and cuisine to some one hundred guests at the Kursaal Bad Canstatt, Stuttgart.
In his brief remarks to introduce the Philippine cultural performers, Honorary Consul Neuhmahr, expressed appreciation to the State Government for the opportunity to feature various aspects of Philippine culture, including its native products, local cuisine and tourist attractions.
During the two-part presentation, a Filipino-German cultural group Philippinisch-Deutscher Verein Nordschwarzwald impressed the audience with their performances of the ‘Tinikling’ and ‘Bagobo’ folk dances. The Department of Tourism’s “Wake up in the Philippines’ tourism videos, provided by its Office in Frankfurt, were shown prior to the performances.
The evening’s highlight featured the fashion show of Milan-based fashion designer Lionel Christian Lanuzo who dressed his Filipino and German models with meticulously-designed terno and the traditional men’s barong tagalog, made with indigenous materials such as banig, t’nalak, capiz, sigay, beads, pearls and paper foils among others.
With the assistance of the Filipino Nurses Community in Germany, the Philippine booth promoted Philippine products, tourism destinations and culinary favorities, lumpia and biko. Post’s representatives were also able to attend to queries from those asking about the current travel restrictions in the Philippines.
The Long Night of the Consulates, staged for the first time, was organized by the Federal State of Baden-Württemberg and the Ministry for Justice and Europe Baden-Württemberg under the leadership of Minister Guido Wolf. It was the central event of numerous projects under the theme “Na klar, zusammen halt” (Of course, we stick together).
Twenty five Consulates based in Stuttgart collaborated with the Institute for Foreign Cultural Relations, Europahaus, and the state capital to achieve their goal of “making diversity of nations come alive during the one-night event.” The sites of the activities were scattered throughout the city to ensure social distancing. END 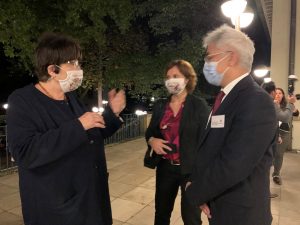 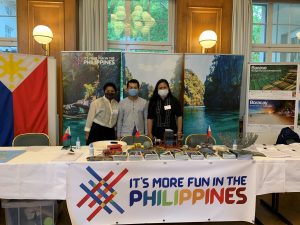