19 June 2019 – To coincide with the celebration of the 121st Anniversary of the Declaration of Philippine Independence, the Philippine Consulate General in Frankfurt inaugurated its new office on 17 June 2019 with the members of the Consular Corps and local government officials of Frankfurt and neighboring areas in attendance. Senator Loren Legarda was the Consulate General’s guest of honor. 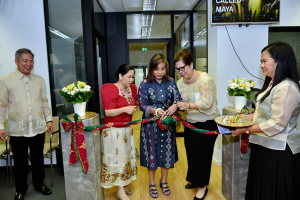 Senator Loren Legarda unties the ribbon during the inauguration of the Philippine Consulate General in Frankfurt. In photo are Ambassador Ma. Theresa Dizon-de Vega and Consul General Evelyn D. Austria-Garcia assisting the Senator.

“The re-opening of the Consulate General is consistent with the Philippine Government’s priorities to bring our services closer to Filipinos overseas, particularly in Southern Germany. We wish to express our deepest gratitude to the Honorable Senator Legarda for being instrumental in its re-establishment. The Consulate General shall endeavor to promote Philippine interests and serve the Filipino community under its jurisdiction with the highest standards of excellence,” Consul General Evelyn D. Austria-Garcia said. 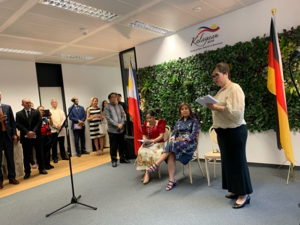 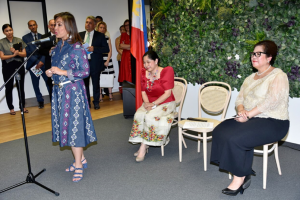 During her remarks, Senator Loren Legarda said that she was “inspired, challenged and excited” on the recent developments in Philippine-German relations, which include the celebration of the two nations’ 65th year anniversary of diplomatic relations, the purchase of the Embassy chancery in Berlin and the re-opening of the Philippine Consulate General in Frankfurt. She stressed the importance of Philippine-German relations and her commitment to further deepen the two countries’ bilateral ties. 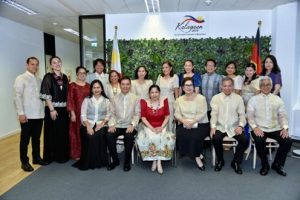 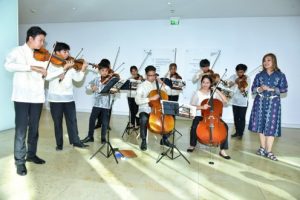 Pundaquit Virtuosi serenades the guests during the celebration of the 12st Anniversary of the Proclamation of Philippine Independence and Inauguration of the Consulate General’s new office.

To showcase Filipino musical flair, Pundaquit Virtuosi, a Zambales-based string orchestra, composed of youth from modest backgrounds and led by renowned Filipino violinist Alfonso ‘Coke’ Bolipata, serenaded the guests with a mix of Filipino and classical music. The group is currently on a European concert tour and has performed in two other separate events in Frankfurt. A variety of traditional and fusion Filipino food created by Filipino-German chefs based in Frankfurt was served to the Consulate’s guests.

Prior to the inauguration, the Consulate General’s officers and staff also held a flag-raising ceremony followed by a Filipino breakfast on 12 June.

The Consulate General, which is currently housed at Westend Carree 1st Floor Grüneburgweg 16-18, 60322 Frankfurt am Main, has been rendering consular services such as passports, visas and notarials since January of this year.