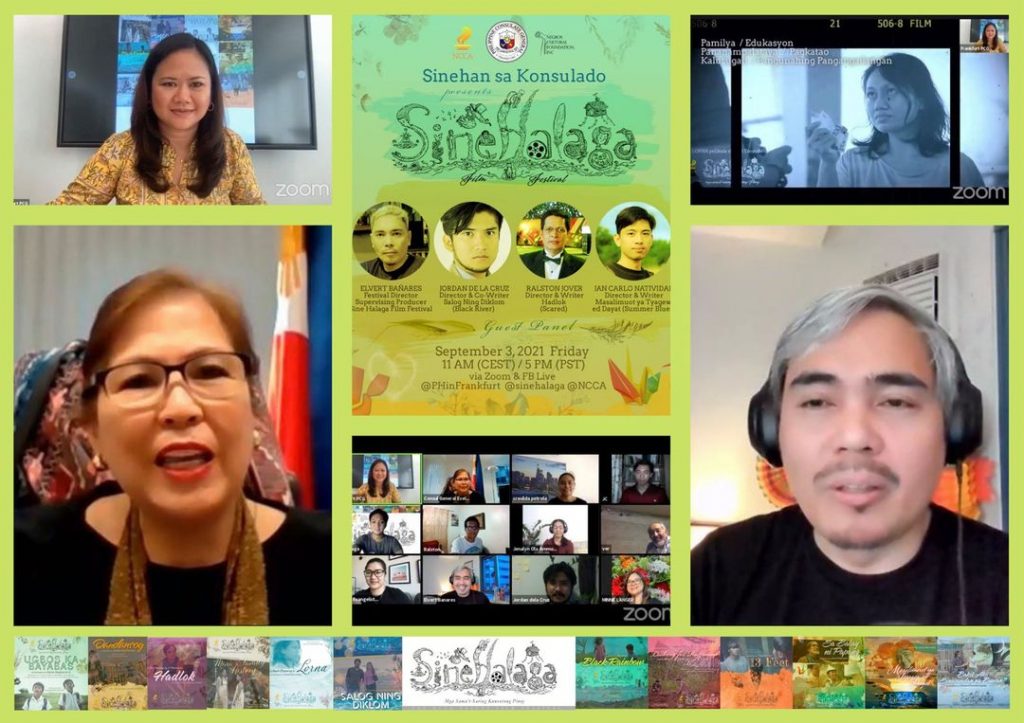 3 September 2021 – In collaboration with the National Commission for Culture and the Arts (NCCA), and Negros Cultural Foundation (NCF), the Philippine Consulate General in Frankfurt held today the first international launch of the Sine Halaga Film Festival via Zoom and Facebook Live. The film festival, which was officially launched on 25 August in Manila, provides a platform to Filipino filmmakers to give an account of stories rooted in their localities that depict Filipino values.
During the event, Festival Director Elvert Banares along with guest film directors Jordan dela Cruz, Ralston Jover, and Jan Carlo Natividad, introduced to the Filipino-German audience the twelve featured films which are being shown for free via the Vimeo platform. Director Banares emphasized the role of overseas Filipinos including those in Germany in supporting and promoting Filipino films abroad. He narrated the challenges of filmmakers in creating original content which promote awareness of the nineteen (19) defined list of core and shared Filipino values based on a research study conducted by the NCCA. These include personal values such as value of the self, life and purpose, resilience, happiness; and social values such as good governance, love for country, honesty and integrity. He also underscored that each film was written to reiterate the importance of these Filipino values while depicting local customs and practices, shooting in particular regions and featuring leading local actors and cinematic teams. Sine Halaga also has an educational component as the films will be used in classroom settings.
Consul General Evelyn D. Austria-Garcia expressed appreciation to the film festival organizers and directors for the opportunity to hold in Frankfurt the first promotional launch abroad. She also emphasized that the featured films serve as instruments in boosting appreciation of the country’s cinematic industry and encouraged the Filipino-German community to do their share in promoting Filipino films overseas.
The 12 featured films in the film festival are the following:
1. Mina’s Family History by Christopher Gozum
2. Salog Ning Diklom by Jordan dela Cruz
3. Ugbos ka Bayabas by Manuel Magbanua
4. Black Rainbow by Zig Dulay
5. Looking for Rafflesias and Other Fleeting Things by James Fajardo
6. Sa Bahay ni Papang by Kurt Soberano
7. Dandansoy by Arden Rod Condez
8. Bakit Ako Sinusundan ng Buwan? by Richard Soriano Legazpi
9. Hadlok by Ralston Jover
10. 13 Feet by Carlo Obispo
11. Masalimuot ya Tiyagew Ed Dayat by Jan Carlo Natividad
12. Lorna by Noel Escondo
#Sinehansakonsulado
#SineHalagaFilmFestival #sinehalagasaibayongdagat
Sine Halaga