Consul General Evelyn Austria-Garcia met with members of the Filipino-German community of Thuringia on 27 August 2019. It is estimated that there are around 200 Filipinos currently living in the former East German state. They include entrepreneurs, nurses, students and spouses of German nationals. The photo on the left includes Ms. Mariethel Bruhn (3rd from left), who received the Emily Roebling Prize in 2015 for her success as an entrepreneur and cultural bridge-builder. 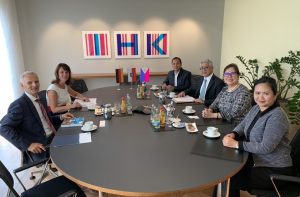 Consul General Austria-Garcia (2nd from right) is shown with Dr. Mark Bremer, Head of the International Department of the Chamber of Commerce & Industry of Erfurt (leftmost), which counts 65,000 member-companies. Thuringia is known for its automotive, optics, mechanical engineering and medical technology sectors. Other growth industries include biotechnology and green energy. The state’s GDP is approximately Eu 61 billion.